About the Glove Guru Blog: This blog is all about gloves and everything useful about gloves. Primarily, I offer tips, gloves in the news, and new product announcements. Normally, I only post about 2 to 3 times a month and most often during seasonal changes. Signing up for my posts is FREE and you will receive Special Offers and Discounts exclusive only to registered followers.

Who is the guru: It’s not clear when Joe McGarry was first dubbed the Glove Guru. Some claim it was the mid-80’s, others when his website Gloves-Online.com launched in 1996. Back in the dark-ages of the web circa 1996, he launched Gloves-Online.com to be a clearinghouse of information on all things gloves. He quickly realized that on-line was the future and today he sells millions of pairs of gloves – of all types from industrial to fashion and everything in between–each year. In addition to being an e-entrepreneur, he holds patents for several industrial and consumer gloves and continues to design gloves for all types of uses. Maybe you’ve read a few of his articles that have been published in various industrial trade publications. Chances are that if you’ve seen a new and useful glove, it was most likely from Gloves-Online and possibly designed by Joe himself. While Joe’s specialty is in industrial work and critical environment high-tech gloves, he’s the guy who spends his time tinkering with new ways to make or source a better glove. With over a quarter century of glove experience, he undoubtedly can give you useful and practical glove advice.

It was just 5 years later that, Joe McGarry, launched Gloves-Online.com.

To put this innovative endeavor into perspective, this was around the same time that Amazon initially launched its bookstore and 2 years before Google was founded.

The timing of the Gloves-Online.com URL and the uniqueness of the URL domain name alone is a great example of it’s the early entry into the internet WWW world. Some of you may recall the heydays of the early .com era and the drive to have a web presence at that time. During this time many opportunists were buying up all sorts of URL names without any intentions to build a web site but with the only objective to sell the name to an eager buyer.

FYI, below are very interesting examples of the most expensive domain names recently publicly reported:

Joe also owns glovesonline.com but he preferred the novelty by using the “hyphen” in the name and for a better look to users. Glovesonline.com is a redirect domain as well as gogloves.com.

It’s interesting to contemplate what the value of the GO Gloves and Gloves-Online domain family of URL internet names are worth today.

Our evolution’s through the years….

GO Gloves, which the company is commonly called today, was the very first web portal in the world devoted exclusively to gloves. GO Gloves was an offshoot of Polygenex International, Inc. which was founded by Joe in 1990 and became the largest domestic manufacturer of specialty high-tech knit gloves. GO Gloves was originally developed as a source of glove information for people searching for glove know-how on the internet.

The existence of the original Gloves-Online information web site actually led to a new unforeseen opportunity to actually sell gloves that people were searching for but could not find.

The very first gloves that GO Gloves featured for sale on the internet where high-quality white cotton gloves including the gloves that were manufactured by Polygenex. These white gloves, often referred to as parade gloves, were selected since people were searching for sources of these gloves since they were difficult to find locally or at department stores as in the old days. As examples, these types of gloves were used by church ushers, bell choirs, funeral pall-bearers, military guard units, marching bands, catering companies, cotillions, Santa Claus outfitting, and doorman just to name a few. Consequently, a new internet business dedicated to hard-to-find gloves was born.

The rising popularity of GO Gloves was reflected by its search history which was just over 1 million page views by the year 2000 and doubled to just nearly 2 million page views only a few years later. Today, Joe no longer provides this data for obvious proprietary reasons but it’s become one of the largest glove sources on the internet with a world-wide audience.

In 2008, GO Gloves launched its sister web site Industrial Gloves Online which was focused exclusively to work and industrial gloves. The Industrial Glove web site was set up under a separate URL domain so that buyers looking for work gloves had easier navigation without filtering through all of the consumer glove listings. However, all of the gloves listed on the industrial work glove web site are also available on the main original consumer Gloves-Online web site.

Also, in 2008, Joe developed a special blog devoted to gloves called The Glove Guru. The blog covers useful glove information, glove technical data, and valuable and beneficial glove suggestions. The advantage of the Glove Guru Blog is that it contains more in-depth information about particular types of gloves that is difficult to include on a product description and this information remains as a permanent archive on the internet. The Glove Guru Blog also has its own search engine so you can easily locate articles and information on gloves.

Gloves-Online also has a very robust internal search engine integrated within the web sites to make it very easy to find and locate a glove by its design, manufacturer, or use. Our site search engine will also locate a glove that is featured on both of our web sites regardless of which web site you are searching from using the search box.

I’m finally back after a short hiatus.

I made a major move from the old and outdated Google Blog Spot platform to the more modern WordPress platform. It’s hard to imagine but I started the Glove Guru Blog back in 2008. Furthermore, it took some time and hard work to move all of the posts and images to our new home. That’s an amazing 11 years of valuable glove information and advice.

The most important aspect with the Glove Guru Blog is the fact that the information is permanently archived for research and reference data pertaining to gloves. It includes information for everyone…from simple answers to basic glove questions like laundering cotton gloves to highly technical safety data such as cut resistance. A simple search in our search box at the top of the blog will link you to all of the posts on a searched topic or word. Use it wisely as there is vast amount of data.

As an additional benefit, The Glove Guru also introduces the latest new gloves to hit the market or new glove innovations and information, so anyone can join our mailing list to get this insider news in a timely manner.

If you are one of my faithful subscribers, it would be nice to let me know that this post reached you without any glitches. Otherwise, it’s back to some heavy lifting and more coffee.

In case you missed our latest newsletter you can view it by clicking on the Title or this LINK. 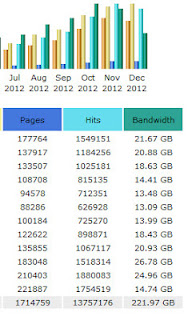 In September I was happy to boast about reaching the astonishing milestone of One Million page views since January 1, 2012. That benchmark was shattered with our holiday glove sales and we ended up with a remarkable 1,714,759 customer page views by December 31st.
As a reminder to those less fluent with internet analytics, page views are the conservative metric when evaluating web site analytics. The example being that if we counted actual hits, the number would be 7 to 10 times higher due to images, etc. You can see this in the chart which I added for the doubtful.
In conclusion, I wish to thank everyone for your support and your business and I wish you the best in the New Year.
We’ve got some exciting new gloves to talk about this year so I’ll be back in touch shortly. In the meantime, you might like to take a look at some good Winter Gloves.
Happy New Year, We Glove You at Gloves-Online.com.

I’ve been discussing gloves here for over 4 years now since 2008. That’s a lot of glove speak about gloves.  The subscriber base has increased dramatically and the antiquated Google FeedBurner which delivers my posts to you just doesn’t cut it these days. Too many delays, too many problems, and no support forced me to jump to a more robust platform to deliver my glove news and posts to you.
The new feed for my posts is called FeedBlitz. It offers similar functions as before but with more management tools and more reliability.
Actually, this post is actually and “hopefully” being delivered by the FeedBlitz program.  I don’t want all of you to confirm that you received this post or I will be reading e-mails for days. However, I would appreciate hearing from a few of you (friends and the other glove gurus) to confirm that your subscription was transferred properly as a quality control issue.
Once I confirm that everything is working properly again, I’ll be announcing a new glove line being featured this fall at our Olga Gloves shop in St. Thomas, USVI.