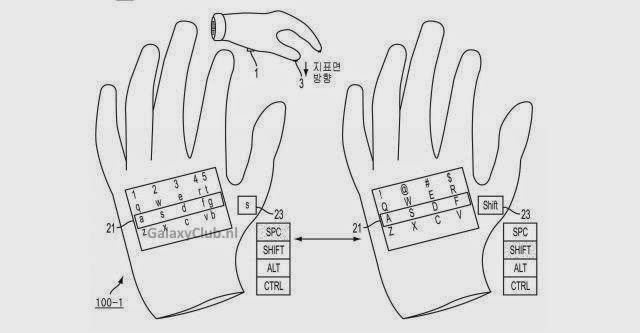 It’s official. No joke, Samsung has filed for Smart Glove Patent.
You may recall last April when I wrote about the April Fools’ joke that Samsung played regarding a Smart Glove. Well, it seems that the joke was more about a reality. Will Samsung and Apple do battle again over patent infringement?  Maybe, since I wrote in 2009 about Apple filing a glove patent.
In any case, based on the patent applications, I believe we will soon see new wearable electronic devices in the form of gloves. After all, we currently sell various types of touch screen and cell phonegloves which continue to increase in popularity. For those that need to know the difference, touch screen gloves are self-explanatory and cell phone gloves employ removable digits.
In case you’re curious and to give you an idea what a Smart Glove can become, the diagrams revealed that the glove will feature flexible displays and also a number of sensors that are found within the glove itself. (see image) The actual patent applications describe the product as a “finger motion recognition glove.”
As usual, I’ll keep everyone informed here as I learn more. The one thing you can count on is that we will feature any Smart Glove that becomes available once we get are hands on them.